Prior to joining the Airport John held the role of Chief Commercial Officer at Newcastle Airport for three years overseeing the relationships with all key commercial and airline partners and driving the growth strategy for the airport.

John is a qualified accountant and spent 8 years as Finance Director of Newcastle United Football Club where he had responsibilities for Finance, Commercial and Operation. John led a turnaround program to deliver a strong and sustainable business model at the football club during his time at the club.

John previously worked for Procter & Gamble across many financial and project management roles over a 9 year period after graduating from Loughborough University. 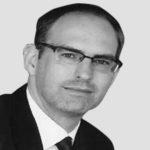