The three leading trade associations in the aviation sector have come together to call on the Government to be bold, when it launches its consultation on aviation policy next month.

“As the Coalition Government recognises, the UK’s economy needs to compete in both established and emerging markets. This requires excellent aviation connectivity right across the country, ensuring the UK has both vibrant point to point airports and sufficient world class hub capacity. This means prioritising a favourable planning and regulatory regime and developing a bold aviation policy, permitting new airport capacity where required. To ensure there is no further erosion of the UK’s competitive position, the Government must set a clear timetable for these measures to be put in place, as part of a new aviation policy.”

To draw attention to the issue, the trade associations have published the cartoon pictured below. 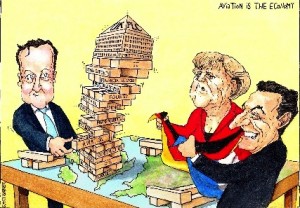 Next month the government publishes its draft framework for aviation…

Don’t play games and risk our international competitiveness. Aviation IS the economy

BATA CEO, Simon Buck, said: “Aviation is directly responsible for nearly a million jobs*. If one looks at the wider visitor economy as a whole, its direct and indirect impact is 8.2% of GDP, equivalent to £114 bn and 2.6m jobs**.”

ADS Deputy CEO and MD Aerospace, Graham Chisnall, added: “Britain has the world’s second largest aerospace manufacturing sector. However, this is a globally competitive business so we need policies that nurture the industry and keep its high-tech jobs in the UK.”

AOA Chief Executive, Darren Caplan said: “Last November, the Treasury recognised the importance aviation plays in connecting the whole of the national economy and in fostering links with existing and emerging overseas economies. Number 10 now needs to support aviation too, and to act fast to ensure we have the aviation network and capacity required for the UK to grow. Delay will simply cost the country jobs, businesses and routes to our international trading partners.”