The UK aviation sector is now worth £52 billion in overall GDP, 960,000 jobs and £8.7 billion in taxation to the Treasury, according to an authoritative new report. 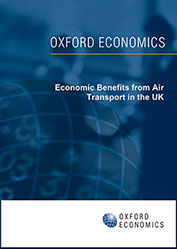 The study, commissioned by leading players from the aviation and tourism sectors and due to be published at the Annual Conference & Exhibition of the Airport Operators Association (AOA), the trade body for UK airports, on 10 November, shows that all three elements of the sector’s contribution to the UK economy have grown.

The report, carried out by the respected consultancy, Oxford Economics, brings together data for airlines, airports and other ground-based infrastructure and aerospace manufacturing. It shows that aviation provides substantial economic benefits to the UK economy and its citizens, some of which are unique and essential to the operation of a modern economy.

The sector’s contribution to GDP is £51.966 billion, which equates to 3.4% of the whole UK economy, with the largest single contribution coming from airports and ground services, closely followed by aerospace and then airlines.

Aviation’s contribution of output and jobs to the UK

Oxford Economics is “the world leader in global forecasting and quantitative analysis for business and government, and the most trusted resource for decision-makers seeking independent thinking and evidence-based research”. http://www.oxfordeconomics.com/.