Dave Lees joined Bristol Airport as its new CEO in August 2018, after several years as Managing Director of Southampton Airport, and previously as the airport Operations Director and Planning and Development Director. During his time as MD, Southampton achieved record growth in both passenger numbers and service level achievements. Dave has also had a successful aviation career across a range of roles at other UK Airports including; Heathrow, Gatwick and Stansted.

Dave has a BSc in Transport Management from Loughborough University where his passion for aviation developed.

He recently moved to the South West, and his interests include, travel, running, power boating and photography. 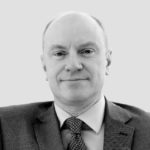