GORDON DEWAR is Chief Executive, Edinburgh Airport Limited.  Gordon Dewar took up the post of Chief Executive in July 2012, with the airport experiencing 63% growth in passengers from 9m to 14.7m passengers in 2019 – a record for any Scottish airport.

Rebranding the airport as the place where ‘Scotland meets the world’, Gordon has overseen significant capital investment in capacity, productivity improvements and customer service enhancements that have been recognised through airport and wider business awards in Scotland, the UK and internationally.

Gordon has worked tirelessly to steer the airport through the Covid-19 pandemic, ensuring it stayed open throughout and diversifying the approach.

Gordon spent 4 years with BAA running Glasgow and Edinburgh airports through periods of extensive investments in terminal capacity and passenger growth from 2007 to 2010.  He then spent 2 years as Chief Executive at Bahrain International Airport creating a independent and profitable business for the first time after a carve out from Government. 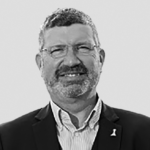